So I was minding my own business...no wait that's not quite right
So I was reading about a blog called http://www.mightyugly.com/ by Kim Werker...
The premise is cool, it's all about cheering on making something ugly
check it out.
And the funniest thing happen.
Clearly Kim is a very powerful witch because the idea planted so quickly and deeply into my mushy brain that despite intentions to remedy these pants at several intervals... 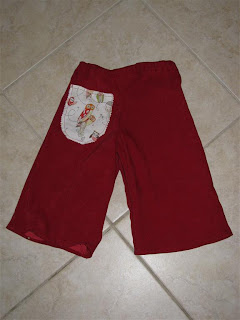 They are some of the ugliest pants I've ever seen.
It started as an innocent act of crafty activism.
I had just returned from a most excellent clothing swap and had scored all sorts of hotty items to chop up and refashion...mostly for a three year old.
I had a red dress that at first blush seemed like a giant piece of material ripe for snipping.
I took a deep breath and started only to THEN notice that it was pieced together exactly 1 million times.
Seam upon seam upon seam.
So I made the 'seams fine' to me pants.
Only impregnated with the "make something ugly" concept suddenly my sewing  machine stopped creating equal tension which made all the stitches drunk.
Then a series of strange scissor possessions and hemming catastrophes struck
The picture doesn't do it justice.
Really...one should look away. Have someone hold your hair as you chunk.
But then again, she's 3 and as long as it has a pocket, red velveteen/ lame pantaloons for summer what the hell
Maybe that witchy voodoo will work in our favour
I need more parking karma.
Update:
Added pom poms to the ugly pants. If they are going to be ugly, they may as well be fun 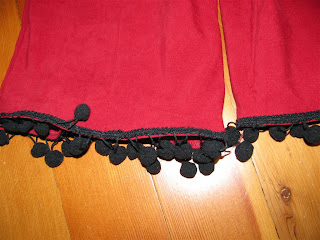 Update: Well the fun pants evolved into the 'death by dancing pants'.
Those innocent pom poms interlock when a 3 year old whirls dervishly.
Then the 3 year old crashes to the floor, repeatedly.
First I tried cutting the loops thinking if they just hung instead of lassoing one another the death trap would relinquish
I was wrong.
Then I added THE ugliest inch with barely there dress scraps below the pom poms and sewed them to it.
Which killed a lot of the dervish whirling. 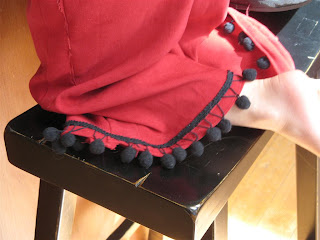 The funniest part was because Pu has a new pom pom obsession she loved the ugly pants
and decided to wear them to big girl class
She returned with them safety pinned on because I gather they were concerned about the slippage &
likely afraid of the potential coin slot. 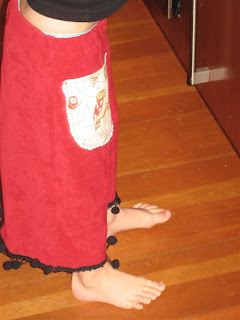 The ugly pants are super 'relaxed fit' for Pu's new potty skills,
but toddler booty on parade apparently rattled Pu's teacher.
It's a proud sewing moment when my kid's teacher is intervening in pant slippage.
Sigh.
The ugly pants, the epic journey
Posted by MacGyver's Lovechild at 10:37 PM