In building the hideout, the pillow stash
has been getting a little excessive.
Nonetheless when Nu & I were reading
and snuggling,
she started disappering.
There is a wee space between the bed and the wall.
Like all short people Nu was obsessed.
I decided I've become quite attached to these
particular short people,
and,
I'd be sad if one slipped into pillow quicksand
never to be seen again.
And so... 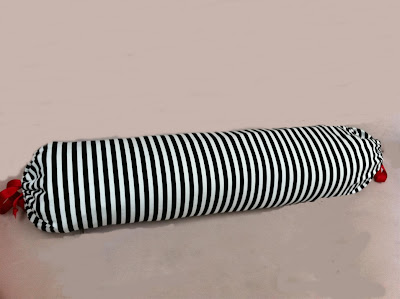 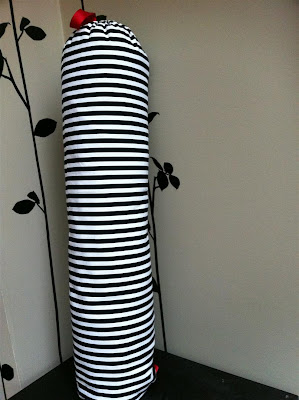 The fun thing
(for me, I don't get out much)
Is that it is filled with two giant rolled up towels.
These are wicked, huge amazing wedding towels.
That we never use.
They are so heavy that they enslave the wearer.
They are the 'good' towels & someday,
inexplicably, when my muscle mass increases,
we will throw them into rotation.
Until then, they take up half our house,
and mock us for their inaction.
Until now!
Now they are functional & plug
the potential baby vortex. 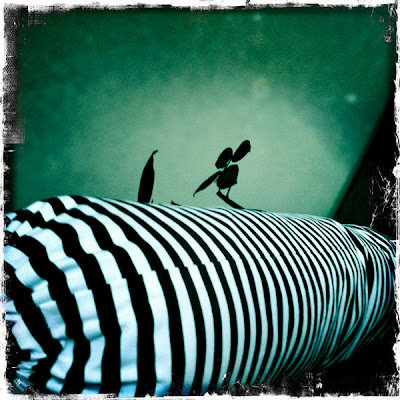 (someone should have lined up those stripes)
Since this is apparently the tangential post...
I have found myself in strange,
sometimes compromising positions since I have begun stitchery.
I have found myself partly clad in a bathtub
straddling a giant pre-stuffed bean bag chair,
with millions of tiny Styrofoam beans forming a
static imaginary mustache in all sorts of odd places.
I have found myself calmly removing my own multicoloured
stitches from my wounded paw after a sewing machine fight.
The baby blocker was no exception.
And there I was...
towels rolled and at the ready.
Giant pillowcase sewn and keen to take form.
So I began to stuff the giant towel pillowcase.
I grabbed it with zest and tugged the cover over the towels.
Naturally it was placed between my thighs
for best purchase.
As I struggled with, and grunted a little,
as I forced
what can only now be described as the towel condom
onto my towel roll-
I was suddenly transported back to the '80's
where the informative Canadian sex educator
"Sex With Sue" Johanson
demonstrated to our grade nine class
putting a condom on a banana.
Sigh.
If only the sewing room could talk.
Who knew it could be so naughty?
﻿
Posted by MacGyver's Lovechild at 9:06 PM