I have never made something so wee before.
The tiniest of stitches.
The smallest of  booties.
The silliest of projects. 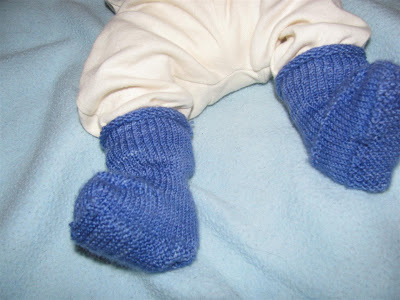 I had to make 3 instead of the traditional pair.
Why?
A reasonable question.
Instead of attempting my first teeny tiny project in English,
I chose Norwegian.
I don't speak any Norwegian.
And so as you can imagine,
it didn't go that well.
The pattern was almost translated into English.
With 'almost' being the key.
My first attempt achieved a club footed monstrosity. 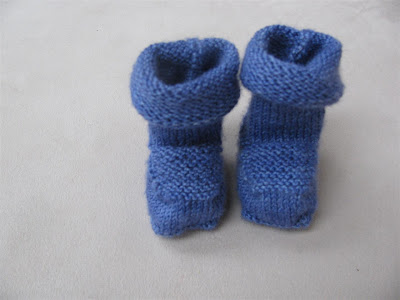 I was very brave and ripped it out.
Such strength of character!
These actually stay on little kicking feet.
Unlike any sock I have yet to meet.
I definitely caught arthritis from my fist clenched knitting.
Totally communicable from little tiny knitting needles.
Be warned.
Posted by MacGyver's Lovechild at 7:55 PM